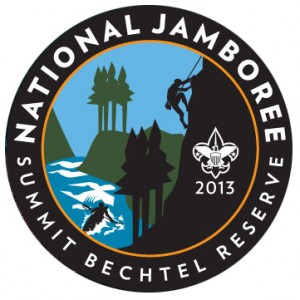 Damian has his sights set on West Virginia for the big Boy Scouts of America 2013 National Jamboree in July.  10 days of Scouting fun at the new Summit Bechtel Reserve and 10 days touring American and LDS Church historical sites including Washington DC, Gettysburg,  9-11 memorial, Palmara NY, the Hill Cumorah Pageant, Kirtland Ohio, and Independence Hall in Philadelphia.  Personally, I would have been scared stiff do leave home for 20 days, go to the other side of the country, with boys and leaders I hardly knew and be among the youngest in attendance  -- but Damian is so excited he can barely see straight.

The 20-day adventure, as you can imagine, has quite the price tag, but Damian is committed.  He will be joining 35 other Boy Scouts in his provisional troop, most of which have been preparing for this event for the past 2 years (and 2 years ago, Damian was a Bear Scout in the Cub Scout program -- so we had no idea about this Jamboree back then).  Being late in the fund-raising game is a challenge to be sure, so as soon as January hits, Damian will be in full out fund-raising mode.  Wish him luck!